The Japanese black bear (tsukinou guma) can grow up to 200 cm and weigh 120kg. They tend to live in broad-leaved deciduous forests and are omniborous. Though they may occasionally attack a small fawn or eat an animal carcass, they mostly like to eat acorns (どんぐり) or trout. From winter to early spring, they will hibernate inside hollowed trees or in caves below the roots.

A larger Ezohiguma bear in Hokkaido is the largest land animal in Japan and eats more meat than bears in Honsuu.

The bear menu depends on the season. In the early summer, they eat "takenoko" before switching over to acorns in the fall. If you see a giant pile of acorn shells on the ground with broken dogwood branches scattered, its likely to be the work of a bear.

Bears will also peel away the skin from takenoko to eat ants, or eat chestnuts while discarding the shells.

Bears will leave their claw marks on a tree bark to make their presence known. They'll also leave accidental marks when climbing. 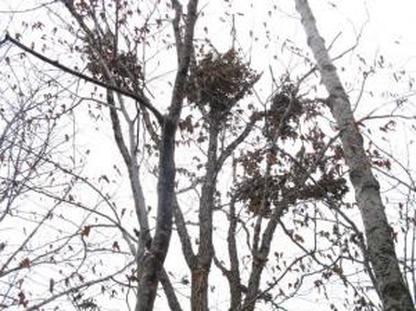 The bear "shelf" is an easy giveaway that a tsukino bear has been in the area. The bear will bend and break bunches of branches as they go on eating the nuts from a tree. Eventually, the a "shelf" forms up in the tree and supports the bears weight.

These especially stand out in fall when the leaves have fallen. They resemble giant birds nests.

Peeling Away Bark
Bears will peel away the bark in the early spring when food is scarce.

In some cases the bear may peel away a 1meter section of the tree (cedar). Some believe this may have some bigger significance as this portion of the tree will decay due to mushrooms and hollow out. The hollow tree won't be ready for the bear that took off the bark, but one day its descendants may move in?

Bears will spend the winter in rock caves or hollowed trees.

After the bark is peeled off the tree, the water is sucked up allowing the tree to dry up and fall over. Before Japanese would burn trees to make charcoal, however these days the bears handle that job themselves, killing 2,500 trees a year (each).